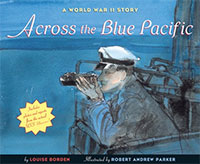 Across the Blue Pacific

When the United States enters World War II, Molly is attending Beechwood Elementary. But her thoughts are with Ted Walker, her neighbor, who is serving aboard a cruiser in the South Atlantic.

Three years later, the war is still going on and Molly is in the fourth grade. Ted is still at sea, as a naval officer of the USS Albacore, a submarine in the Pacific Ocean. Orchard Road feels like the safest place on earth, but somewhere on the other side of the world, Ted and his crew are carrying out dangerous missions. No one knows when they will come home, and young Molly must find a way to live with fear during wartime.

View research photos for this book

REVIEWS:
"This elegant book speaks to the far-reaching effects of war and the healing power of memory."
—Publishers Weekly