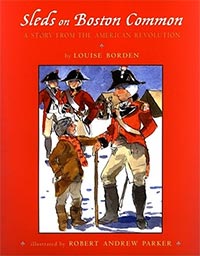 This is a book that was published in the Fall of 2000, illustrated with Robert Andrew Parker's wonderful watercolor paintings. The seed for this book was planted in December, 1987 when I was sitting in my dentist's office, reading an article about sledding in Smithsonian magazine. A few lines of the
article mentioned an incident in Boston in 1775-76, involving local children wanting to sled on Boston Common, and a British general. I wrote down the date of the issue, put the scrap of paper in my pocket, and tossed it into an ideas file when I got home. I love snowy days and sleds, and you'll find that sleds appear in a few of my other books.

For several years after that dental appointment, I kept picturing those kids with their colonial sleds, and the British general in his red coat.

In 1991, I called up Smithsonian and obtained a copy of that 1987 issue. Then I wrote to Peter Stark, the writer of the sledding article. A year went by. Finally, one day, I received a postcard in my mailbox from Missoula, Montana from Peter, telling me he had just been forwarded my letter. From then on, I followed my research trail for a picture book. I visited the Boston Common several times, the New York Public Library, and finally the Clements Library at the University of Michigan in Ann Arbor, Michigan. I read books about Boston Common and what schools were like in colonial times, studied maps, made notes, and learned about Thomas Gage, the top British general in North America just before the Revolution. One trip to the Clements Library was made in mid-November and it snowed that day! I took this to be a good luck omen.

Many people encouraged me along the way, especially Margaret McElderry. For months, I was immersed in this Boston legend, trying to find out when and if it really happened. Other steps included corresponding via e-mail with the curators of Firle Place, General Gage's ancestral home in England. Imagine! E-mail research for a story about the American Revolution, a time when it took weeks or months for mail to reach America from England.

Sometimes I begin by writing a book in third person...then I may switch to first person. Every book is different and has its own voice. It always takes time to find that voice. Setting and place are very important to me as a writer. And I love the challenge of putting poetry into my lines. But figuring out a good plot for the story? For me, that's the very hardest part.

I finished writing SLEDS ON BOSTON COMMON: A Story from the American Revolution in the month of December, the same season that the story takes place, tied a red ribbon around the manuscript, and mailed it off to my editor Margaret. Meanwhile, my family was wondering if we would ever get our Christmas tree decorated. Margaret McElderry called me a few weeks later. "I like this book enormously!" All those years...all those little steps, one by one by one. My editor's belief was a rich reward.

I celebrated by buying myself a red jacket and asked myself "What would Thomas Gage think of my writing a book about him over two hundred years after his troops were encamped that winter on Boston Common?"

Robert Andrew Parker was chosen to illustrate the book, and I began working on a new project.

Another year passed. Then in January, I opened our front door one snowy evening to watch the snow fall. There on my doorstep, was a big envelope from McElderry Books, containing the color copies of the art for SLEDS. "Now this is amazing!" I thought. Another wonderful journey of writing a book.