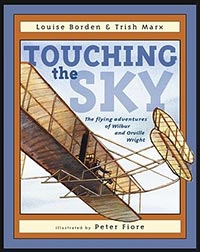 On December 17, 1903, the Wright brothers took their historic first flight, and by 1909 the brothers were full-fledged celebrities. In September of that year, Wilbur and Orville finally showed the world, firsthand, just what they had achieved. In the United States, Wilbur delighted the crowd with spectacular flying demonstrations in New York City during the city's Hudson-Fulton Celebration. He flew over the harbor, glided past tall buildings, looped the Statue of Liberty, and even traveled up the Hudson River to Grant's Tomb. The people of New York were astonished and thrilled to witness these unbelievable flights. At the same time, Orville held daring public exhibitions in Germany and set amazing new records. He flew the highest ever, and took the longest flight with a passenger. The Wright brothers opened doors that no one knew could be opened! Louise Borden and Trish Marx document the extraordinary lives and achievements of two of our most celebrated American heroes, Wilbur and Orville Wright, from their humble beginnings to their later success and riches.