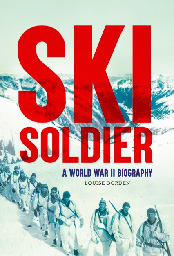 This true-life adventure story tells the story of Pete Seibert, a ski soldier severely wounded in World War II, who went on to found the Vail Ski Resort in Colorado.

Ever since he first strapped on his mother’s wooden skis when he was seven, Pete Seibert always loved to ski. At eighteen, Seibert enlisted in the U.S. Army and joined the 10th Mountain Division, soldiers who fought on skis. In the mountains of Italy, Seibert encountered the mental and physical horrors of war. When he was severely wounded and sent home to recover, Seibert worried that he might never ski again. But with perseverance and the help of other 10th Mountain ski soldiers, he took to the slopes and fulfilled his boyhood dream— founding a ski resort in Vail, Colorado. The immediacy of Louise Borden’s vivid text puts readers on the front lines with Seibert and his platoon. This dramatic recounting of a World War II experience includes archival photos, as well as commentary on the legacy of the 10th Mountain Division, and a detailed list of sources.

Click here to read an author interview about this book

"Borden’s insightful biography, written in verse form, is highly readable and distinguished by the generous collection of period black-and-white photographs that illustrate it. It’s a treat for both ski buffs and military history fans."
—Booklist

"(T)old in brief lyrical passages composed of short groups of lines and accompanied by numerous photos, quotes, and maps... A true story of valor, stamina, and dedication. Seibert's exciting biography will appeal to fans of sports and adventure stories."
—School Library Journal

"An accurate, high-interest narrative focused on a mature topic but written at an accessible reading level is a rare gem."
—Kirkus