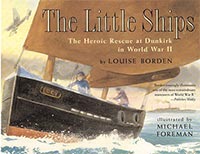 In May of 1940 -- the early days of World War II -- half a million British and French soldiers were trapped in France. Weak and wounded, they needed aid. Help came in the form of countless small craft, steered by brave young men, in the legendary armada of "little ships" that sailed aross the English Channel. Many people wanted to be a part of the rescue mission. Here is the story of a girl who was so determined to help that she disguised herself as a boy to blend in with the men as they sailed toward Dunkirk.

This book was also published in the UK by Pavilion Books and is available in the UK in a new paperback edition.

Read the story behind this story

View research photos for this book

REVIEWS:
"Through this fictionalized account, the incredible story of the evactuation of Dunkirk in May 1940, is brought to life... Foreman's watercolor paintings add to the drama, excitement, and poignancy of the narrative... the story should prompt children's curiousity about an event that for them is part of a far-distant past and stir their hears with this family's courage."
—School Library Journal, starred review

"[In] a spare and dramatic child's voice, wonderfully free of patriotic preaching or moralizing ... [the young narrator's] account gives a personal, memorable character to what might otherwise be an abstract chapter of history."
—The New York Times Book Review

"An eloquent... book that makes a near-mythical event of WWII real and deeply personal."
—Kirkus Reviews

1998 Notable Book in the Field of Social Studies