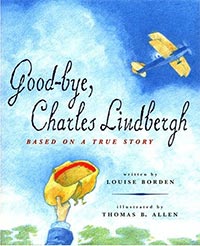 Illustrated by Thomas B. Allen

A farm boy meets his hero, Colonel Charles Lindbergh, when he lands his bi-plane in a field near Canton, Mississippi, in 1929.

REVIEWS:
"This book is both an interesting glimpse back in time and a moving story of how the ordinary can suddenly become exdtraordinary, irrevocable changing one's perception of the past and the future."\
—Booklist, starred review

1999 Notable Book in the Field of Social Studies