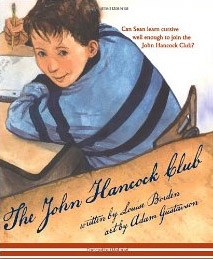 Sean McFerrin and his third grade class in Room 121 can't wait to learn how to write in cursive handwriting. Their teacher, Mrs. Tovani, promises that whoever learns to use a legible and elegant cursive will be inducted into the John Hancock Club. Joining a club sounds exciting, but who is John Hancock? As Sean and his classmates practice cursive writing, they also learn about John Hancock, a patriot in the American Revolution who had a very special signature and who was cheered in an extraspecial way: "Huzzah! Huzzah!" Will Sean's cursive ever be good enough for him to join a club named after such an important man? The surprises in store for Sean and his friends make for the best third grade year ever! Huzzah!

Learn the story behind this book

REVIEWS:
"Borden and Gustavson each capture perfectly the combination of emotions of a new school year...A good addition to themes on school."
—Kirkus Reviews